To learn how a Contract is Archived, click HERE.

To Unarchive a Contract, you'll first need to access the Container. You can do so by searching for it or running a View, but make sure to check the Include Archived (A) checkbox before running the search/view. 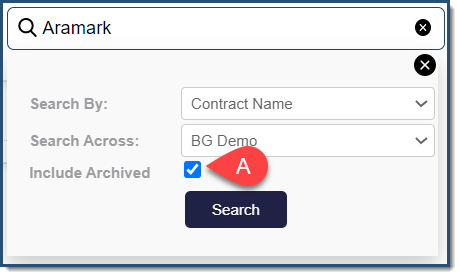 Once inside the Container, you can always tell if a Contract is Archived by looking for the red circle with the "A" above your Workflow (B).

Notice how even though this Contract is Archived, it is still in the "Expired" Stage. That is because while Archiving is directly tied to your Workflow, Archived is not a system Stage in UCM. Stages can be made to allow Archiving from them, but the Stage name itself remains.

To Unarchive your Contract, you'll need to open your Workflow dropdown, and select Unarchive Agreement (C) at the very bottom. 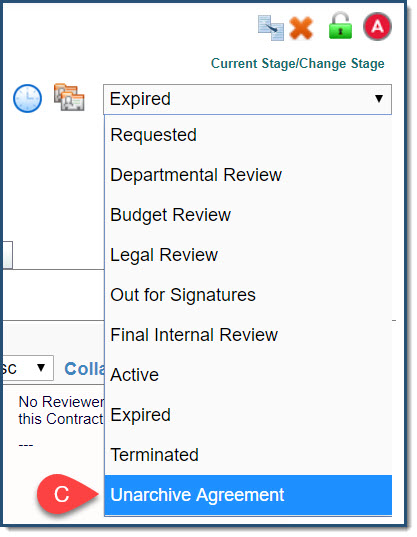 Just like when the Contract was Archived originally, you need to leave a Note (D) when you Unarchive. The Note you leave will be placed under the Notes Tab in the Container.

Now that the Contract is Unarchived, the "A" in the red circle is gone (E), and the Contract can now be found in searches and reports without having to check the Archived box.

The Contract is also still in the same Stage it has been during this whole process, because Archiving in and of itself is not a Stage, but rather a setting that any Stage can be given.