We have updated our DocuSign and Adobe Sign connectors to allow you to now choose if you would like the Signed Copy to REPLACE the original document sent out for signature.

This will help to keep your Attachments tab in a Container a little tidier, and automatically remove a potentially unneeded document. We understand however that not all companies will want to do this, so this is an OPTIONAL feature.

Below, you can see how and where to enable this option for your system, as well as the per-contract choice each User will have when they send out the document for e-signature.

Note: You must have purchased the eSign connector from UCM to see these feature available.

To enable the Replace feature, you'll need to go to Object Administration (may not be available for all Admins. Reach out to UCM support if you do not see this option and feel you should). You can get there by going to: 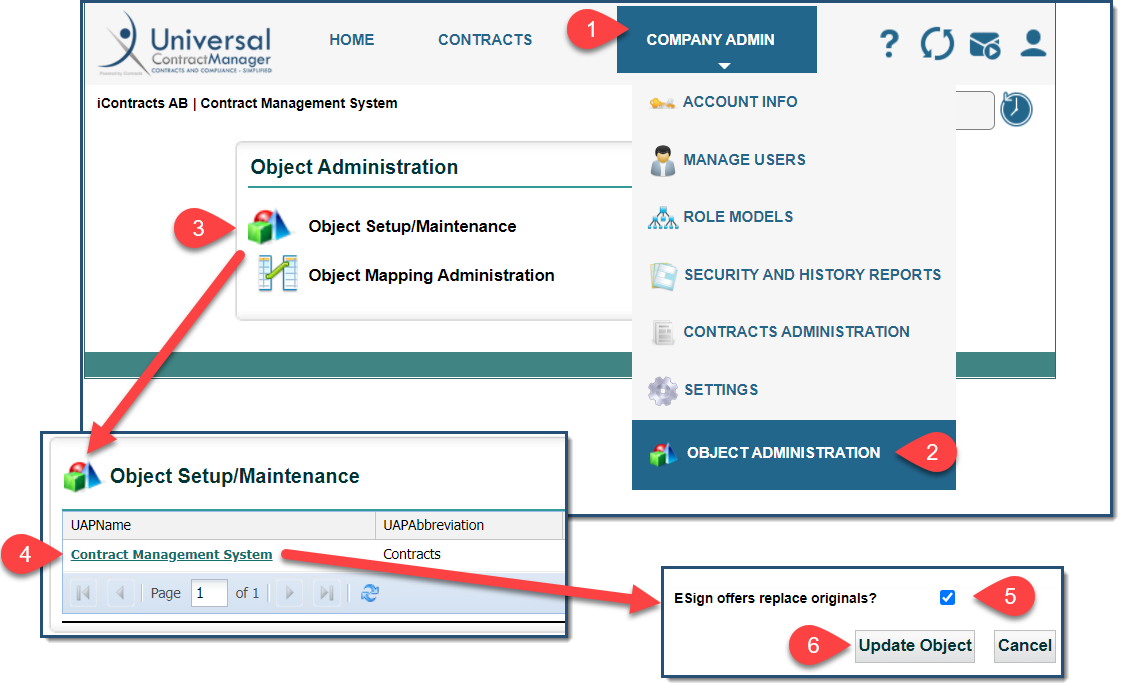 Once you have completed the above steps, you'll need to log-out and back in for the changes to take effect, but you are now configured to allow your Users to REPLACE the un-signed copy of the Contract with the Signed version they bring back in.

Once the feature is enabled, you can follow the steps you have taken before to send your Document out for signatures, however, when you get to the stage of that process where you Upload the document to the eSign platform, you will receive the pop-up below:

If you select OK, then after the document is signed, and the Download icon is used in the Container, the Signed Copy will REPLACE the one Sent For Signature.

If they select Cancel, then when they Download the Signed copy, they will have BOTH the Signed, and the Sent For Signature copy of the document.

For example, if the Document being Sent For Signature was version 1.0, and the Signed Copy would be version 1.05, if you selected OK from the pop-up, your Container would look like the image below: 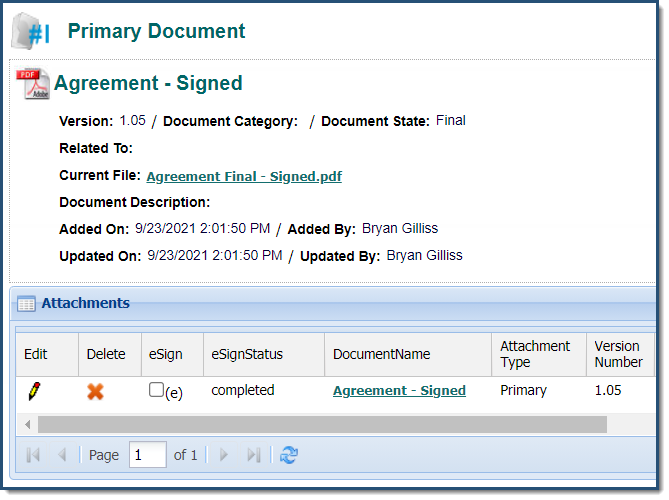 The Signed and Completed document is the Primary (since the original document sent out was also the Primary) and in the grid below, we no longer have Version 1.0, since it was REPLACED with version 1.05. This is tracked in the History Tab as well, with the clearly defined REPLACED in the note.

Another smaller upgrade to the DocuSign and Adobe Sign connectors are that now, if you send out the Primary Document for signature, it will automatically be updated to the Primary Document when it is brought back into UCM, regardless of if you are using the REPLACE feature from above. This replaces the bold red text that used to show under the Primary letting you know there may be a newer version in the Grid.

Collaboration and other longer Notes not showing completely

There was previously a bug, where the only way to see the full details of a Note that was over 200 characters was to go to the Note details itself and view them there.

We have now added in a Read More link in the Note column, which will allow you to view the message in full in a pop-out window.

There was another bug in UCM that would prevent a User from sorting their Template or Library grids if they accessed those grinds from a Contract Containers Attachment Tab. You previously had to go back to the Home page to do so, but this issue has since been resolved and you will be able to sort and select which column headers you want to see from the in-Container grids.

Finally, after the release of the Notification Center a few weeks ago, there was a small bug found and reported where Users who received Review completion emails, where not able to use the link provided. We have since fixed this issue, and the links in the emails sent from the system will take the User right to that Contract.