There are a few different email notifications that can go out to your Users about Workflow. All of them will have the same general information in them, like the Contract Name, the Current & Previous Stage, and when the Workflow was updated. Depending on the type of notification it is though, there will be different information that your Users will want to focus on. Below are examples of each type, and where your Users will want to look for the most important information.

When a Stage is first reached, an email will be immediately sent to all Assignee's. In addition to the general information about the Contract, your Users will want to focus on any Directions/Instructions that you provided them during the set-up of your Workflow. They'll also want to check if there are any other Assignee's on the Stage with them (A). All Workflow notifications come with a link that will take your User directly to the Contract Container (B). 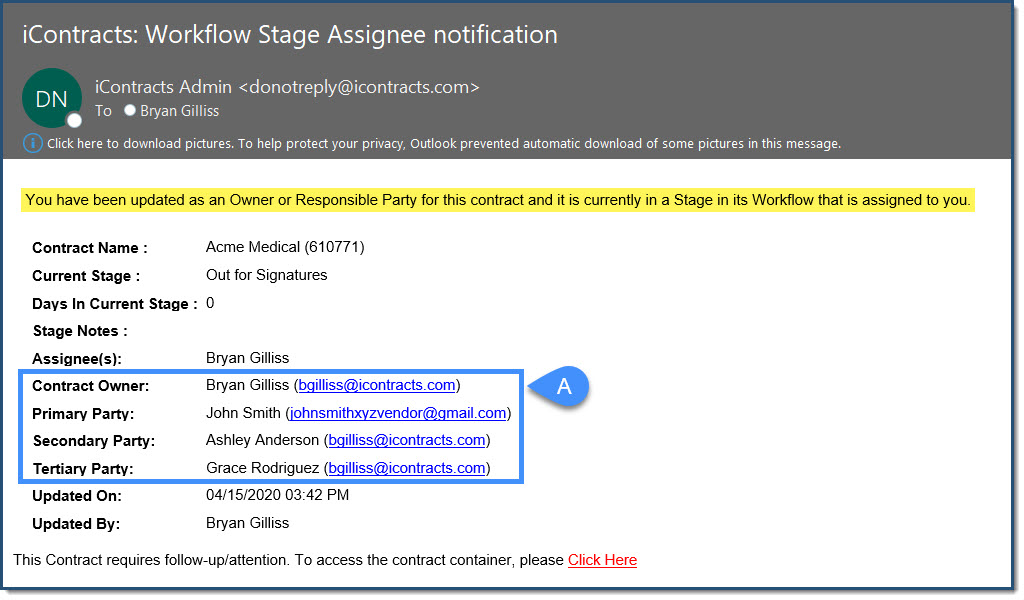 If you are using Owner or one of the three Responsible Parties as your Workflow Assignee's, then there may come a time where a User assigned to one of those roles, who had already received the Initial Workflow Assignee Email, needs to be changed out for another User. When that happens, an update notification will go out to the newly assigned User letting them know there is now a Contract that they are responsible for. To help the User with any potential questions, a list of all Responsible Parties  for that Contract will be included in the notification (A).

Note: If you use the Manage Assignee's option from inside a Contract to update the Assignee's on a Stage the Contract is currently in, NO new notifications will be sent out. You will need to either message that User directly, or move the Contract back a Stage, and then into the original Stage again. If you use the latter option, be aware that any Users assigned to the previous Stage will receive an Initial Assignee Email. 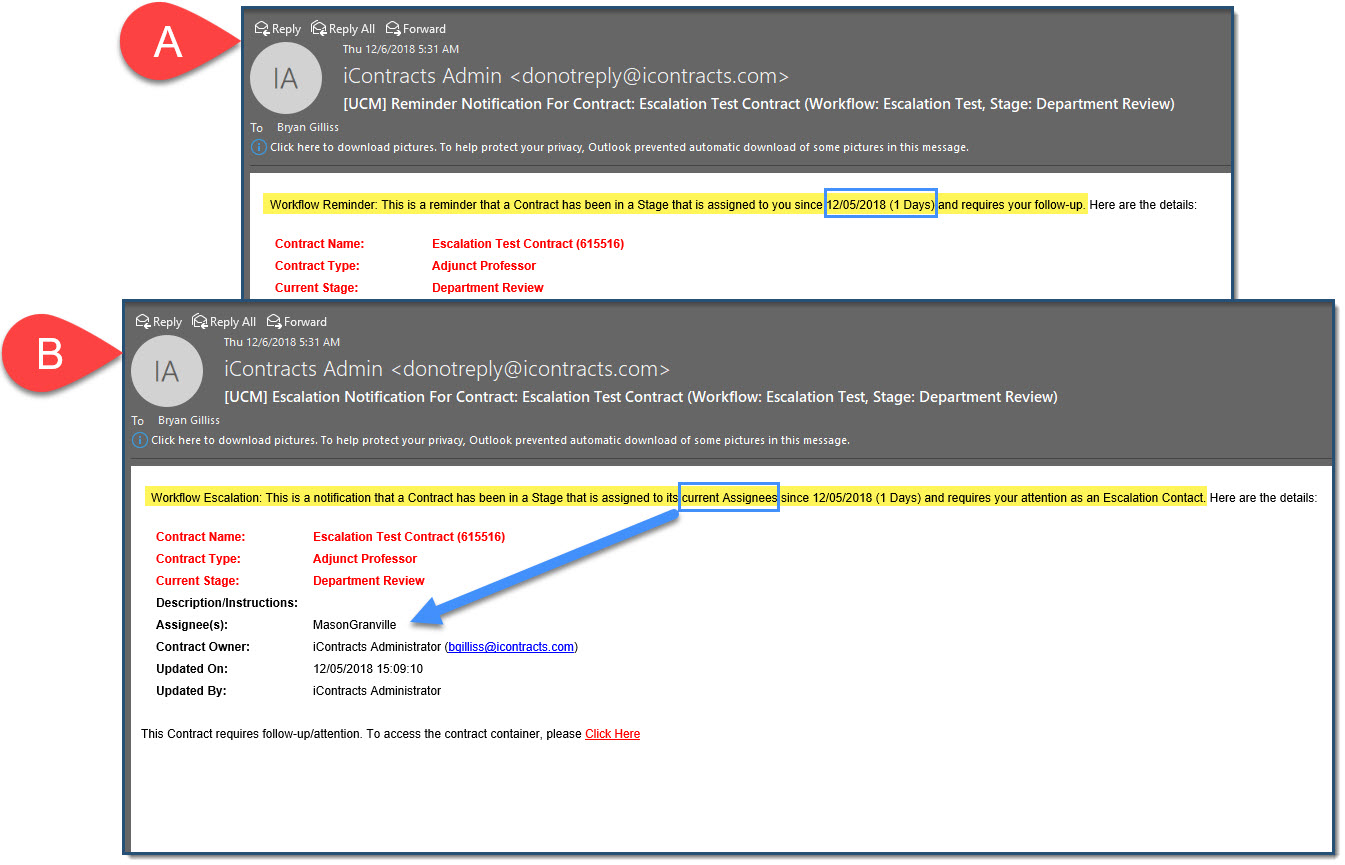 Reminder (A) and Escalation (B) notifications contain all the same information from the Initial Assignee Email, but the wording at the top will be different. For both, you will be told when the Contract was first assigned, and the number of days the Contract has currently been in that Stage.

Specifically for the Escalation email, those Users will want to pay extra attention to the Assignee's section so they know who the Stage was initially assigned to. 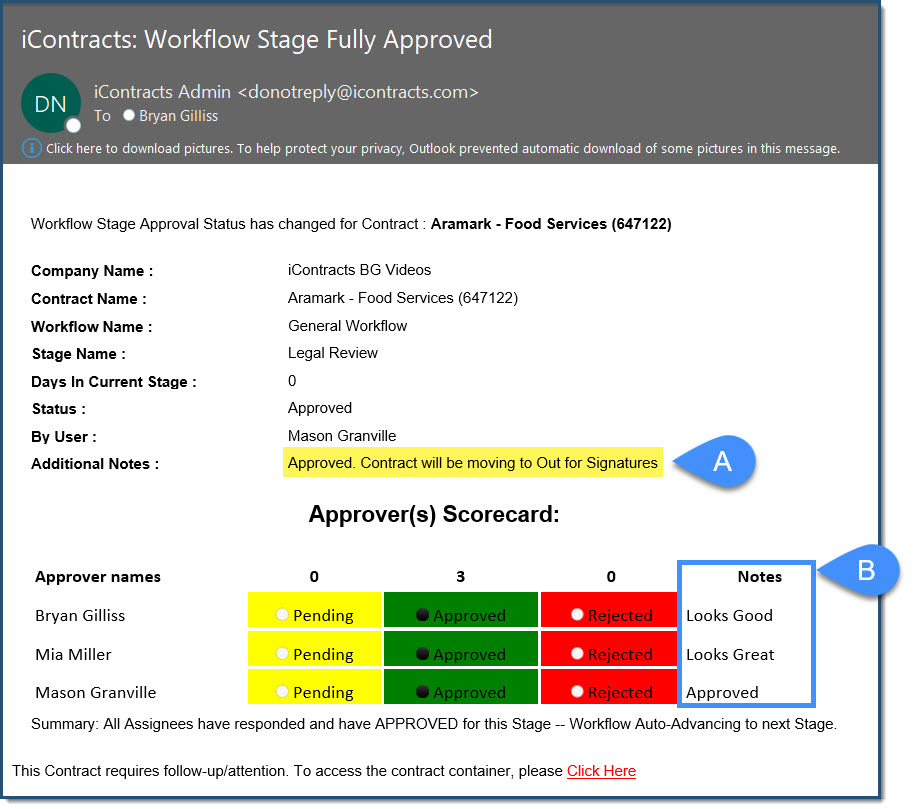 Once a Stage has been Approved by everyone, all Assignee's will receive a notification summarizing everyone's approval. You can see under Additional Notes, which Stage the Contract is moving to next (A), and you can also see all the Assignee's Notes that they were required to leave when Approving (B).

Option (1), Notify on Rejection and All Approved, is the default setting, and option (2), Notify All, will send out the notifications on every Approval or Rejection.